The Burning Issue… Considerations for Property Professionals in Respect of Fire Safety to Assets.

The Burning Issue… Considerations for Property Professionals in Respect of Fire Safety to Assets.

Its important for property professionals and clients to be aware of fire safety to assets, especially in light of recent events such as Grenfell.  Although, Grenfell is only a recent example, we should not forget that there have been several significant disasters that have occurred over the decades, such as Lakanal House (South East London, 2009), Ronan Point (East End London, 1968), Commercial Court (2018) amongst many others; in the UK and beyond. I guess you could say even back as far as The Great Fire of London 1212!

For property professionals, grey areas are often encountered through legislation and available guidance.  Having recently attended RICS Building Surveying Conference 2019, it was explained that misunderstanding of the Building Regulations is a common cause of fault.   Approved Document B (AD B) was amended recently (in 2018), to clarify and reduce the complexity of fire safety guidance in the Building Regulations following the recommendations made by Dame Judith Hackitt.

Following the Grenfell tower fire, a particular focus of the amended AD B relates to building cladding systems.  It is understood that Grenfell and Larkanal Houses had an Aluminium Composite Material (ACM) rainscreen cladding, which tragically enabled the spread of fire up the building.  So what is ACM and why do we need to be aware of the impacts that ACM can have on a buildings fire integrity? 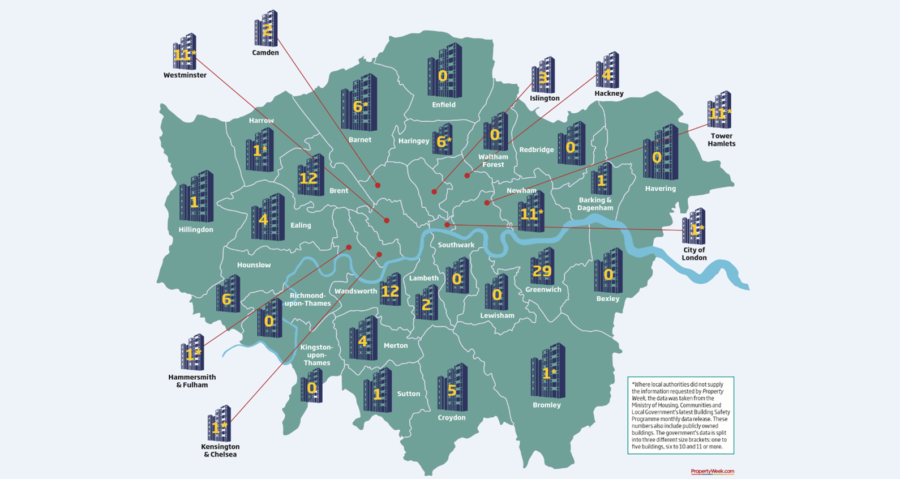 Number of private residential blocks over 18m high with ACM

ACM is essentially two skins of aluminium bonded either side of a core of material such as polyethylene (PE), polyurethane (PUR), profiled metal or a mineral core.  It is understood that ACM can delaminate during a blaze and therefore exposing the core material, which in some cases can be ‘more flammable’ compared to other core material alternatives, and in Grenfell’s case, the core contributed to the acceleration and spread of fire up the outside of the tower with fatal consequences.

We must however remember that it’s not just the most recent AD B amendments that one needs to be aware of.  Other key pieces of legislation that needs to be considered and aware of can include; The Regulatory Reform Order 2005, British Standard BS: 9999, Approved Document 7 and Building Regulations to name a few.

Here at PRE, we know that each property we survey should assessed holistically and in entirety in order to fully understand how all the fire engineering principles work together, as opposed to in isolation.  The sensible starting point prior to our site surveys is to identify the fire strategy for the property followed by the establishment of fire detection and warning systems.

For high-rise residential properties in particular, this may involve an ‘evacuation’ or ‘stay put’ policy, the latter of which has seen huge scrutiny following Grenfell.  Although as we know, other deficiencies (such as cladding mentioned above), could be considered to have compromised this policy, which is why it is important to assess holistically, as mentioned.  As we approach an era where ‘vertical village living’ may become more popular (especially with the demand for housing), its important that fire strategy is carefully considered.

A Building Surveyor should also have a good understanding of the occupation densities, protected means of escape, emergency lighting and signage for the property they are inspecting.

In line with AD B, the height of the building should be assessed to establish whether it is more than 18 metres in height and whether the building is clad with any combustible material, such as rainscreen cladding (which may be able to be identified upon review of the as built documentation).  In some cases, the suspected cladding may require testing if any information is not available.  An interesting question was raised during this year’s RICS Building Surveying Conference, as to why the definition is limited to 18m at such a time when fire safety is paramount, a definitive answer was not available at the time. 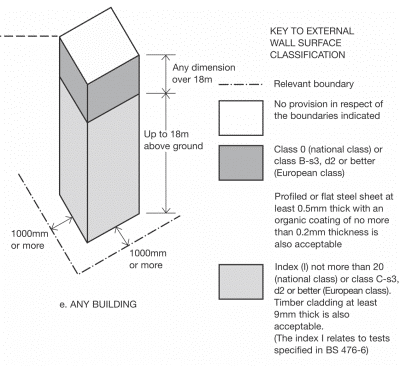 Fire Risk Assessments (FRAs), can sometimes be a good source of pre-survey information, although we often find that the quality of FRA’s can be poor.  As part of our survey due diligence here at PRE, we interrogate the quality of FRA’s, because after all this is a significant for the safety of people and property.  We also concern ourselves in relation to whether raised FRA items have been closed out, or are they being addressed? How often is the assessment reviewed? Unfortunately, industry fire experts have reported that fire safety checks have declined which brings unease, but it is important that the deficiencies are flagged up and any further recommendations made (and justified by specialists if necessary).

The general view at this year’s RICS Building Surveying Conference was that there is a huge need for FRA’s to be qualified across the industry in the very near future in order to improve FRA quality, in a way similar to that which was implemented for the International Property Measurement Standards (IPMS), if you will.  RICS are also looking forward and intend to review the Fire Safety competency would will be reportedly assessed to a new level (level 4), which should help industry professionals.

Other documentation we may be able to assess may include any building control certification(s), firefighting systems and equipment test certification, compartmentation surveys, testing of as built elements and any third party installation accreditation.  Of course, it is paramount that surveyors validate the data room information when the time comes to carry out the site inspection.

The purpose of PFP is to compartmentalise a property through fire resistance rated floors and walls in order to prevent/ hinder a blaze spreading quickly, which may enable time for evacuation.  Examples may consist of dampers, fire doors, fire walls/ floors. 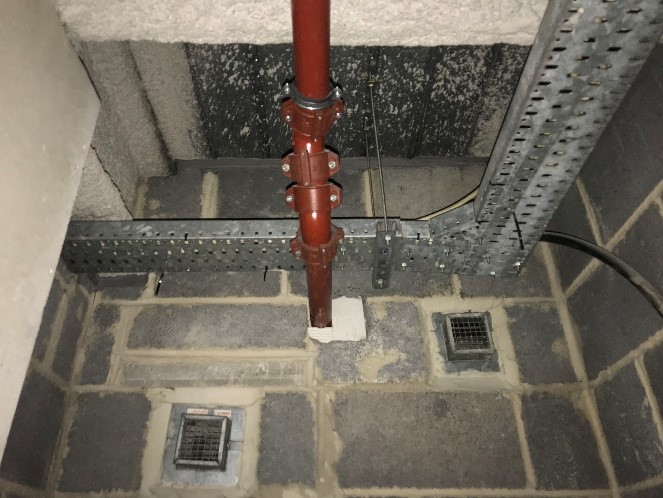 On the other hand, AFP is commonly known as a group of systems that require a level of action to work during a fire, either manually (e.g. fire extinguisher) or automatically (e.g. sprinklers). 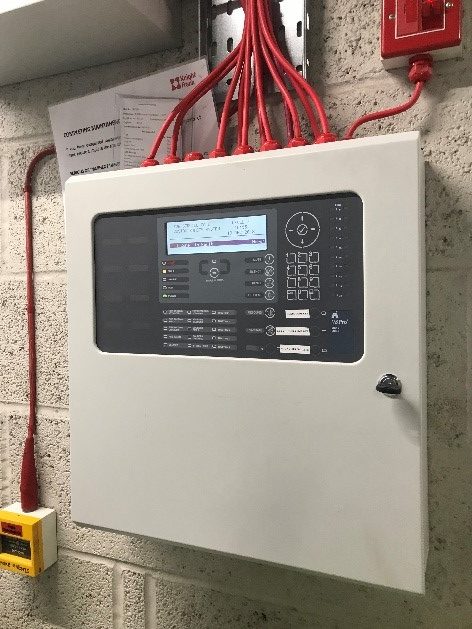 It is absolutely essential that active and passive systems work together. It is therefore very important that surveys investigate in as much detail as possible, especially within areas where fire spread could accelerate in particular, for example, raised access floors, ceiling voids, plant rooms and risers.

The surveyor should be familiar with fire stopping methods such as fire collars, sleeves, batts and the like.  Is there any evidence to suggest that protection has been installed correctly and are they certified (if necessary)?  It may be necessary for opening up investigations to be undertaken, for example to assess cavity barriers behind rainscreen cladding.  Fire stopping quality assurance should be considered, in some cases it may be recommended that third party certification is sought.

Whilst most issues during the construction/ development of a building may be observed by the Clerk of Works (if there is one!), standards often slip later on during the building lifecycle when works are undertaken by Landlords and Tenants.

In our experience disturbed, inadequate or no fire stopping is often identified where new installations are carried out, which obviously does not provide the necessary levels of protection and should be reported back to the property manager or client for resolution. 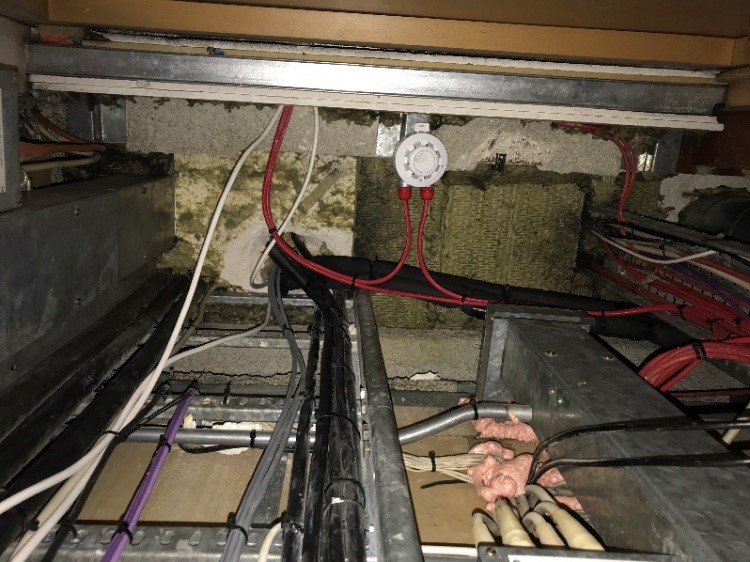 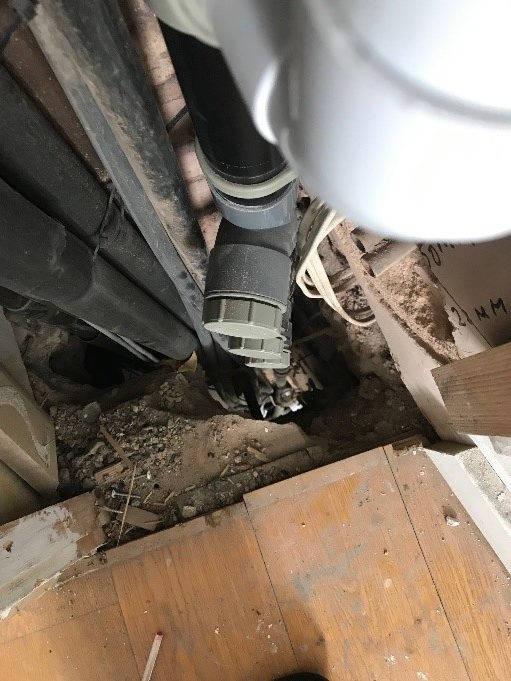 Its important to remember that Building Surveyors are not Fire Engineers, however it is essential that a Building Surveyors report provides a sound understanding of fire safety arrangements, responsibilities and how a property may prevent or limit fire spread, and if need be, advise/ recommend for further specialist advice to be sought.

If you are looking for building surveying or professional property advice, then please do get in touch with the team here at PRE on; +44 (0) 208 406 3000 or email; croydon@presurveyors.co.uk